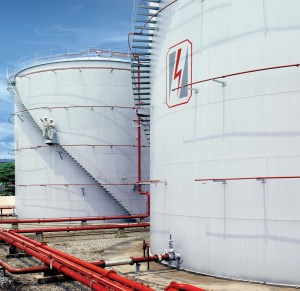 Jakarta, March 25, 2019 – PT Cikarang Listrindo Tbk (POWR) successfully passed through the year 2018, the 25th year of service, with an excellent track record starting with only 25 customers being served in five industrial estates in Cikarang to become more than 2,400 customers in its 25th year. Significant transformation also occurred with the growth from 60MW installed capacity in one power plant in Jababeka to our becoming one of the largest IPPs in Indonesia with 1,144MW capacity in three power plants including the latest one in Babelan. Transformation of generation, which had previously relied on gas as fuel, occurs now the Company has a 280MW power plant with coal as fuel.

During this 25 years, the Company has transformed itself from a private electricity producer recognized only in the Cikarang region to become known in the international market. In this arena the Company is known as the first private company (non-bank and non-investment grade) in Indonesia since 2013 to issue 10-year bonds with the lowest coupon (4.95%), as well as the first electricity company to be listed on the Indonesia Stock Exchange. The Company’s senior notes and shares offering was raised internationally through a 144A offering in the United States and Reg S for regions outside the United States.

The Company, as a national enterprise, has full commitment to contribute to the Indonesian industry and economy through its services. In addition to being the partner of industrial players in five industrial estates in Cikarang, the Company has also been a partner of PLN since 1996. The 25 years of successful service results not only through the Company’s power and effort, but also from the stakeholders’ support such as from central and regional government institutions, state-owned companies, industrial estate developers and other business partners.

The Commercial Director, Matius Sugiaman said “We are very grateful to be able to commemorate the Company’s 25th anniversary. So far, the Company has always received a lot of support from various parties, from central and regional government institutions, state-owned companies, industrial estates developers, industrial customers, suppliers and shareholders. This support enables us to continually provide quality services to the customers. Going forward, the Company is fully committed to be an industry and economy development agent around Cikarang and on a national scale in general by contributing more.”

In 2018, the Company managed to receive various national awards including “Top 3 Good Corporate Governance (GCG) Issuers in Energy Sector” by Warta Ekonomi, “Top 50 Issuers with the Largest Market Capitalization” from the Institute for Corporate Directorship (IICD) and the “Indonesia Fast Growing New Public Company 2018” for the infrastructure category from Warta Ekonomi. This proves that the Company’s management also emphasizes good corporate governance in addition to increasing the Company’s growth.

Entering its 26th year, the Company is not content with doing nothing and continues to evaluate and design future roadmaps, with which to welcome the industrial revolution 4.0 which has been a challenge for all industries recently. Finance Director, Christanto Pranata said “For more than two decades, the Company has gone through various stages of transformation in providing services to customers. Without such transformation for improvement, of course we would not be in the position we are today. The company will continue to transform to improve its contribution in serving industrial and national electricity demand “The transformation commitment was maintained in 2018 in which the Company carried out a digital transformation by adapting the Enterprise Resource Planning (ERP) and Enterprise Asset Management (EAM) systems that would renew the Company’s operating system to provide better service to customers.